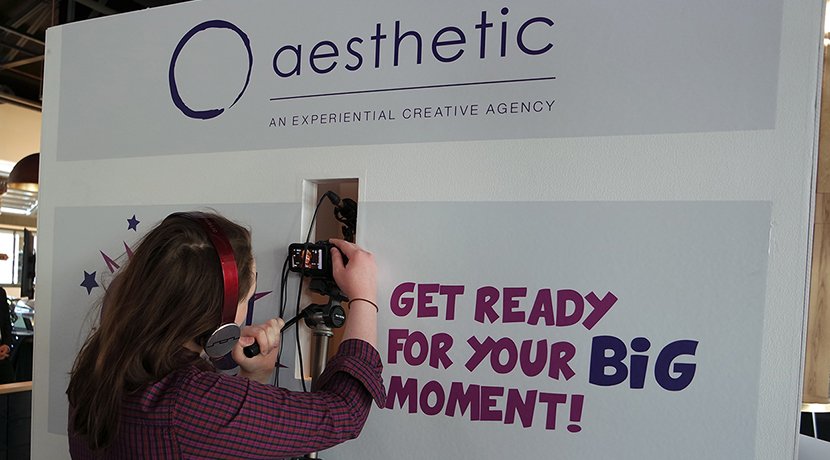 What’s inside the booth? Aesthetic arrives at Events Uncovered

At our core, we create experiences that change people. We recently had the opportunity to demonstrate what that means at boutique industry conference, Events Uncovered held in Melbourne. It was also a chance to provide insight into what experiential is all about, as the term can occasionally raise an eyebrow.

With dedicated floor space and our creative minds combined, we did what we do best. We designed an authentic live experience that changed participants.A striking white booth with fully magnetic walls stood above the exhibit area, curtains drawn and camera pre-set.

An air of intrigue surrounded the prominent structure as passers-by were drawn in by our booth hosts and invited to accompany them to ‘experience the experience’.

Stepping into the unknown, participants had very little knowledge of what they were in for. They knew that a prize was on offer and that they had to be fast, but fast at what? The only clues were stuck to the outside walls of the booth in the form of hand-written words on magnets – ‘scared’, ‘happy’, ‘bamboozled’.

Acting as less extravagant game show hosts, our booth hosts made participants feel comfortable with the experience. For this to work they needed to encourage honesty and support participants through a Q&A process with a twist.

Live experiences are powerful. They have the ability to not only change the way you engage but also influence what you think or believe.

With the camera ready and stopwatch on ‘go’, questions started off simple and fact based, the kind that required little to no thinking. Feeling at ease, questions soon became poignant enquiries about the participant’s life. Confronted by the intimacy of the interaction and ticking of time, participant’s were encouraged to fire off the first thing that came to mind (easier said than done). Caught on camera, participant responses were often followed by surprised facial reactions, providing instant evidence of change.

The activation was a journey of discovery where participants were left learning something about themselves that they either weren’t aware of or had never said out loud. It was successful at demonstrating that even a simple experience can change the way you engage with the world.

To deliver maximum impact, recordings of individual participant reactions were packaged and emailed to them so they could reflect on their encounter.

We were thrilled with the outcome of our ‘race against the clock’ activation. It was successful in creating an immersive and memorable experience that intrigued all in attendance.

I also scored a cheeky selfie with Naomi Simpson! Safe to say the day was a success.